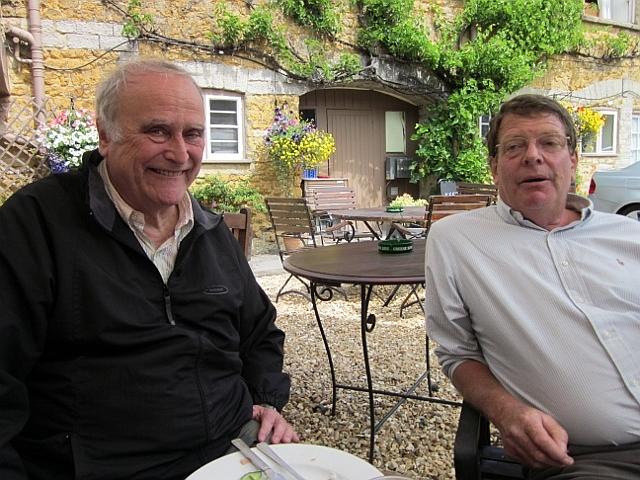 It is with much regret that I have to announce that, due to ill health, I will shortly no longer be running the Chilton Cantelo Oldies site.

It maybe a good time to drop the reigns as the site is going through a quiet time while building up to the 2019 Final Chilton Cantelo Oldies Reunion on the school 60th anniversary.

Luckily old boy Edward Lutley has kindly agreed to take on the running of the site and in the near future the site will be edited by him. Edward, of course, needs no introduction as he has helped me so much over the years especially with the social side of the site.

It has been fun over the years and I look back with pride on the reunions both big and small that we have had and also on the old boys and girls that have been attracted to the site from all over the world.

There is at Chilton a very strong old boy network that I particularly note as evident during my illness. Long may it continue.

At this point I wish to thank the many people who have helped contribute to the site over the years. Firstly I wish to thank Peter and Gail Isaac who have written many of the articles and sometimes under guise! Old boy Peter is President of the National Press Club of New Zealand. Who in this world could I get better and more qualified than Peter to write articles for us and for free! I am very indebted to you Peter.

At this point I must mention David Wilson for his many excellent contributions and obituaries. I only spent one term at Chilton with David and he has proved to be a very good friend.

Old boy Nigel Rofé has helped me immensely especially in the early days of the internet when I needed help in setting up a website. Nigel is a dairy farmer in Northern Ireland. Thank you Nigel your help was invaluable. You devoted many hours to help me.

Richard & Mo Cotes-James (aka Chilton Cantelo Royalty) also contribute greatly by their attendance at our social events and have given me much background help and advice. Thank you Richard and long may it continue.

At this point I must mention Neil C. Smith who founded the original amusing and sometimes infamous “Oldies” site which I took over when it sadly faded from our screens. Neil thank you also for attending the 2010 Reunion of Reunions. Your presence with your friends from your era helped immensely in making the reunion the success that it undoubtedly was. Neil was the original inventor of the word “Oldies” regarding Chilton Cantelo. Clive Lewis-Hopkins 🙂

I had some trouble scanning this Chilton Cantelo School Prospectus because of it’s spine. Also a mouse seems to have had a nibble here and there!

George Tyler kindly let me use the rare sixties cine film taken by his parents on several visits to see their son at Chilton Cantelo School.

Unfortunately this British Pathe Newsreel footage can no longer be found. If anyone knows where we can find it, please get in touch.

The following lines refer to Neil C. Smith’s old Chiltonians website which has disappeared from our screens. I wrote them back in 2002, when I had my old hippy head on, and posted them on Neil’s notice board. It was a hip little site indeed and a lot bigger than this tiddler!

What has happened to you Neil? Clive Lewis-Hopkins.

Say something: Gents (+ Ruth Thomas who was like the only bird at the school at that time).

What a hip little site. I was hanging ten one day in a cyber cafe waiting for the surf to pick up in weston-super-mare when I discovered this site. wow. Cool stuff. Great to re-discover my past life as the golden boy of chilton cantelo. Playing sea cadets, smoking pipe virginia, scrumpy half a crown a pint, oh such a life. But i was young back then and what i wouldn’t give to know then the things i know now. Remember “lift up your hearts” at 10 to 8 in the morning. It was, like, freaky man. gotta hop through. Peace to you all. Good karma. “Magic mushroom” or “the wild one” to my alreet surfer mates. 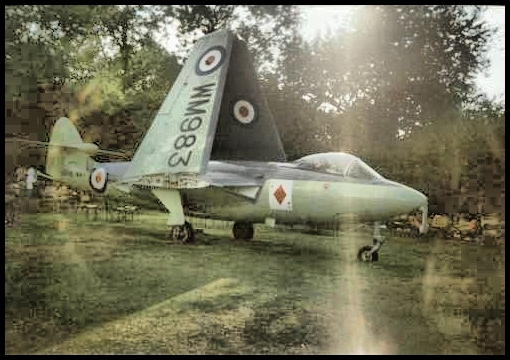 Those of you who were at Chilton Cantelo School when this plane was parked on the lawns in 1988 or thereabouts would be interested to know that it’s now part of the Peter Vallance Collection at Gatwick Aviation Museum at Charlwood, Surrey. You can read all about its interesting history at http://www.gatwick-aviation-museum.co.uk/seahawk/seahawk.html. 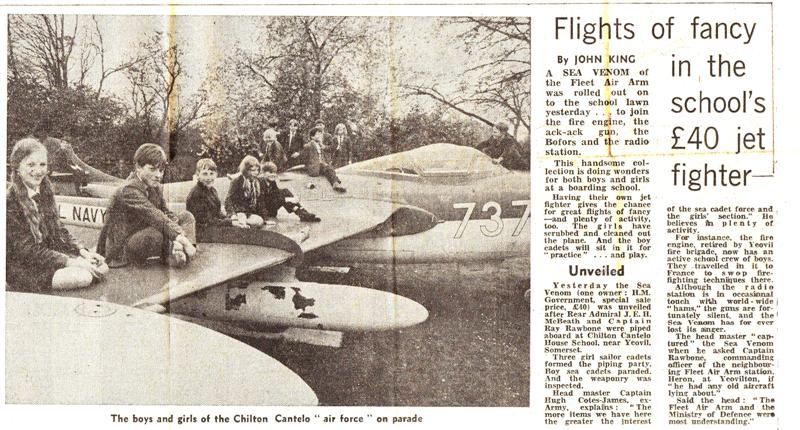 Old Chiltonian Dan Donnelly has come up trumps again by supplying me with an old newspaper cutting from around 1974 of the Chilton Cantelo Air Force.

I was aware of the Hawker Sea Hawk at Chilton Cantelo School but I had not heard of this Sea Venom pictured in the photo below.

According to the newspapers text this Sea Venom joined the school’s fire engine, ack-ack gun, bofurs, and the radio station. At the 2010 Chilton Cantelo reunion I remember someone mentioning a radio station in the middle of the school woods!

I understand that Captain Cotes-James bought the plane from H.M Government for £40. The plane was unveiled after Rear Admiral J.E.H McBeath and Rear Admiral Ray Rawbone were piped aboard.

Apparantly Captain Cotes-James aquired the Sea Venom after asking Rear Admiral Rawbone, who was then the commanding officer of the neighbouring Heron Yeovilton Fleet Air Arm, if he had any old aircraft lying around! The Fleet Air Arm and the Ministry of Defence were most obliging. I remember his son Mike Rawbone, who was a Chilton Cantelo Millfield School boarder as a fellow school boy when I was at Chilton Cantelo in the 60’s.

If I remember correctly Mike Rawbone was the only boy who came to school at the beginning of term by jet fighter!